It’s been a while since my last post to the blog. I’ve been doing projects during the summer, but I haven’t written anything about them. When the autumn comes, I’ll try to  write something about them. In the meanwhile, check out my instagram feed for random pictures: https://www.instagram.com/jukkahapponen/ 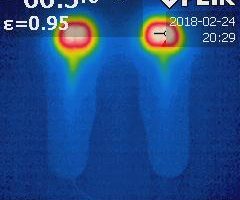 As I told earlier, I had ordered some cheap chinese heated garments, including heated gloves, socks and insoles. Packets arrived from China in a record time, in about two weeks. I had never got my goods so fast in regular post. I grabbed Flir thermar imaging camera from work to investigate how these heated garments […]

After pcb etching it was time to solder the components. I made a short stop-motion animation of the build:   Soldering did not take very long and next task was to flash software to the microcontroller. I used an adapter consisting a row of test pins to attach pcb test points: It works!   I […]

A few weeks ago we were downhill skiing at Tahko ski resort. It was rather cold, around -10c .. -15c. After a while my toes started to feel a bit cold and after a while even more. Then I recalled about heated insoles which my colleagues had mentioned earlier. After Tahko trip, I did some […]